OSS NIGHT : SHORT RISING / "Who knows what is going on in the past?" 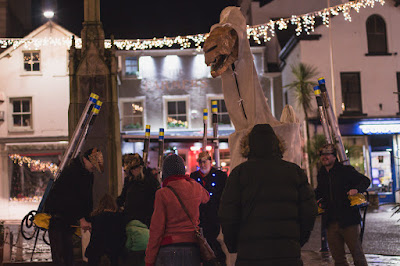 December 19 2018. Publicised with surreptitious fliers and a last minute Short Notice, the Short Ritual and its participants muster in a light drizzle under the Christmas lights. 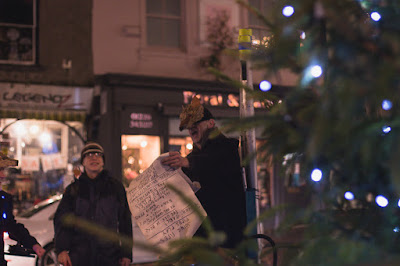 At 6.10 the oss raises its head and launches itself into the available space of the season.

Throughout the year whether suspended from the workshop beams and caught in the sunlight under the low cottage ceilings, the skull has aquired the look of something unearthed, awaiting notice of its
purpose.

12 feet plus of occupied hollow, A Tower of muslin, backpack, poles and modelling material, the oss soon attracts a crowd. Others are drawn out from the pubs by outriders.

A harmonica, caught in the same wind that caused the  oss to sway, makes the pace and calls the Human Organs Pipe band to order at 6.30 with a tune that has made its own slow progress from Derbyshire, via Staffordshire, the East Coast and the West Riding to Ulverston.


2 Who knows what is going on in the past?

I mean, the oss. What is the oss?
Those hollow eyesockets, full of animating shadows waiting to be read.
Stare them down, and you find familiar undirected energies and well- seasoned imaginations at work.

Rituals. Routines. Manners and amusements..stuff we do because we do it, and because we always have. But why do it at all? Why do it that first time, on a spring day or a winter evening? In a white shift or a mask? 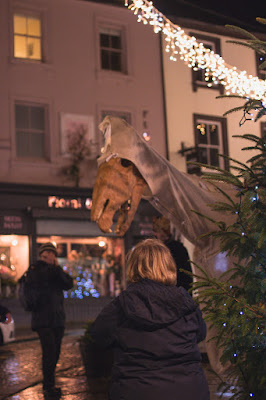 Countless Demeters have loosed their cargo on the shores of our imaginations in recent years . Fears of the Other, traceable back to the Eisenhower years side with techno savvy folk devils of northern Europe and Japan.

Hallowe'en is infused with suburban dread; the glint of metal under streetlights,neighborhoods under lockdown, houses not quite big enough to hide in.

These are just the ripples on the surface of a deeper, shared vocabulary; a dark pool of imagery to draw from in order to confront and deflect fear. For all their current prominence, cinema, tv and netflix are newcomers. 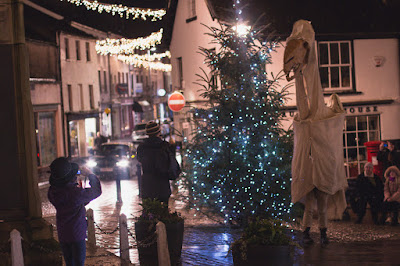 What floats on the surface is only the most recent manifestation of what occupies the depths. The calendar cant contain this stuff; it shows up when it is ready.

Tradition is habit and routine in costume. It grows in the cracks. Gangs, groups, working units all build their own mythology from the mundanities of their downtime; confirming and reinforcing their identity. Significance is visited on the inconsequential details of the journey between explosions of expression and activity.
When the time for such explosions is long gone they provide a link between the past and the present. 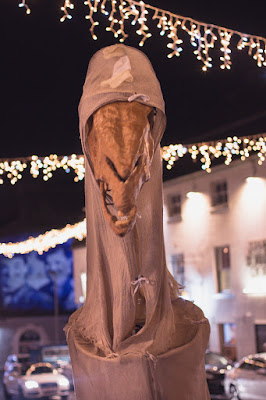 The pubs were shaking off the last drinkers after the folk session; the songs and stories tailing off as the oss approached. It bowed and they patted its muzzle and wished it well.
The Stretton 'oss song isn't very old. Its blend of
English Dance tunes and comic absurdity place it at mid 20th Century. Outside its native Derbyshire the song has showed up in North Yorkshire,South Yorkshire, and Staffordshire. In Cumbria it's ghoulish implications echo local legends of bestiaries, circus parades and elephant burials on Quaker land.
In the 21st Century ,sans lyric and miles apart a Notts Folk fiddler doubles up on guitar and reinstates its charm... 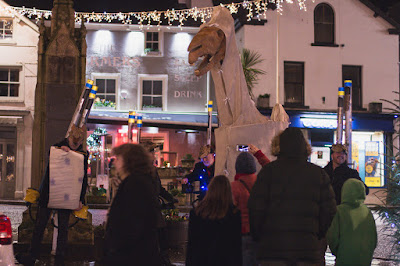 The lyric – where it is used - is absurd. In other branches of its family the oss may be a memento mori, or a screaming street drunkard, or a vessel for a generalised rebirth clad in overtones of mischief. In the Stretton song it is malevolent; it is a killer.

This brutal version comes from an audience tape made in Scarborough in the 80's.

It's menace is belied by the cartoonish appearance of the Ostler and the players. In Derbyshire their heads – as distinct from masks - take on the primary school colours and dauby
aesthetic of the mischievous oss, their fixed stare equally dumb or maniacal.

“Where is St George?” 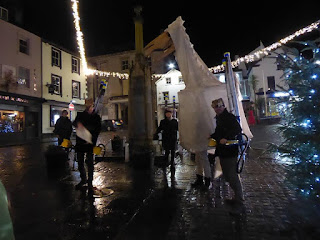 There is none of the sunshine and fresh enamel that light up Mayday; no dazzle of crisp white shirts and no red ribbons dancing in and out of summer shadows. The oss cavorts in the bounceback of whitelight from the wet pavements. His bleached fabric billows like a ghost ship sail against a winter sky.


Where May Day rites call for the oss to parade and charge with energy and gusto , here his stage is contained. His progress is slow; his revels are the stamping feet and frosty breath of cold rnornings and colder nights. Rather than rebirth there is a sense of  a challenge ; if these sticks can stir, then why not yours?

Tonight the roads are busy. Traffic passes around and behind the oss, supermarket staff on breaks watch from ginnels, works do's spill downhill from the railway station, the oss is a meander to be negotiated.

Children join in at the Ostler's invitation. Cymbals clash and roll true. He delivers his headmasterly final address and then the tune begins again.
Ritual is an act of affirmation: nether celebration or commemoration. Just a reminder that we are still here and that we know what it is that has kept us here. 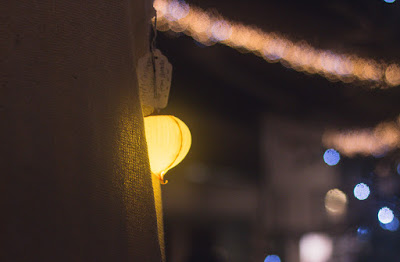 Thanked by the Ostler – who has accompanied the Oss on his journey into town, and will see him home - the crowd inspect the oss, and festoon him. As he turns to leave, a hollowed, glowing onion bounces against his skirt.


"What benefit can historians derive from the study of invented tradition? First and foremost, it may be suggested that they are important
symptoms and therefore indicators of problems which might not
otherwise be recognized, and developments which are otherwise
difficult to identify and to date. They are evidence."
Eric Hobsbawm, "The Invention Of Tradition", Hobsbawm/Ranger

"It appears that the need to define one's community as valid -- by reference to an historic past -- is most acute when that community is only just established or is in decline."
Judy Koren, Amazon review of Hobsbawm/Ranger 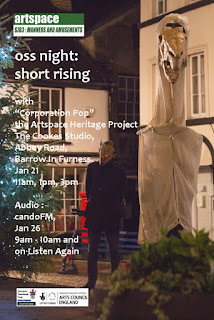 Alistair Anderson - attrib on reliable authority- "you've no traditions? Make some up"